Whether you are allergic to bee stings, or the pollen of the flowers the bees are visiting, grasses, trees, nuts, shellfish, cats, dogs, or something else, you might be surprised and even delighted to discover that hypnosis and the related field of NLP or, Neuro Linguistic Programming has some very real and useful potential to assist you in reducing your allergic sensitivity or even eliminating it altogether.

William Wood, of Northern Utah Hypnosis Center first discovered the power of NLP to eliminate allergies at an NLP Master Practitioner training with Mark Shepard, who practices and teaches NLP and Hypnosis in Albany, NY.

When Mark was ready to demonstrate how NLP could help reduce allergy symptoms, Will volunteered to be the “test subject” or “Demonstration Volunteer”.

Will, already an accomplished hypnotherapist, had several allergies.

One was to pollen and wind blown irritants, another was to cats and the third was a significantly severe allergy to shrimp. Will also had an allergic itching condition that caused him to load up on Zyrtec (R) every day for the last several years.  In his words, “The itching was so bad that if I didn’t take my medicine, it felt like someone was pouring gasoline on my body, setting me on fire.”

Will’s shrimp allergy was so severe that even touching his skin with a tiny amount of shrimp would be enough to cause him to break into hives in the exposed areas. 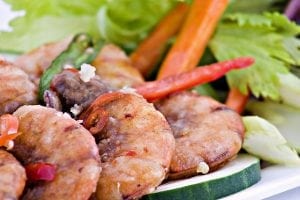 got a shell fish allergy? NLP and hypnosis may be of help

If Will ate shrimp, the doctor had told him that his allergy could send him into anaphylactic shock and could land him in the hospital.  In fact, Will had to carry an EpiPen (R) because if he ate at a restaurant that cooked his food in the same pan or pot that had touched shrimp, his throat would start to close and his eyes would swell shut.  For those of you who have seen the Will Smith movie, Hitch, you know what Will looked like after exposure to shrimp (think two puffy eyes, two swollen lips and sucking liquid Benadryl (R) from a straw.)

Over the previous two years, Will had inadvertently been exposed to shrimp and had a real scare and maybe you know what that is like.  Once, he was at a party where there was a green salad topped with shrimp.  By the time Will came to the party, the shrimp had been eaten off the top and there were only salad greens left–salad greens now soaked in invisible shrimp juices.  Will piled up a plateful of salad and within five minutes his eyes were swollen shut and his throat was closing.  Panic!

Another time, he was at a restaurant and the cook used the same stir fry pan to cook Will’s dinner as well as a previous order of shrimp stir fry.  Within minutes Will was gasping for air.

At the time, Will was VERY skeptical that NLP could help allergies, but he was willing to try because of the scares he had had over the last few years.

The NLP processes only took a few minutes and were supported by using a few other techniques like hypnosis at the end.

The next day Will noticed a dramatic reduction in the amount of nasal congestion and sniffling from the hay-fever. His itching was gone and for the first time in almost three years, he didn’t have to take his Zyrtec for the itching.

He was so excited by these profound effects that he wanted to test the shrimp allergy.

Unfortunately he had left his EpiPen(R) pen back in Utah and didn’t really want to risk being taken to the Albany NY hospital…. so he determined he would gradually test the allergic response by rubbing a tiny bit of shrimp on the back of his left hand.

He did. No reaction.

He waited 20 minutes. Then he tested a more sensitive area of skin, the inner wrist by rubbing a bit of shrimp juice on it. No reaction.

Then he waited another 20 minutes and tested an area of skin at the base of his neck. No reaction.

Step by step he tested his new tolerance of shrimp until he touched it for the briefest second with the tip of his tongue. No reaction.

Finally. Convinced that he had made a major breakthrough, he actually ate a piece of shrimp.

The last day of the training was held at the home of NLP trainer Mark Shepard who has 3 cats. Usually, three cats would be enough for Will’s eyes to swell shut and for his breathing to become labored.  Will had no response to the cats.

And finally, as part of the training William Wood was able to practice the technique on Mark Shepard who had a mild allergy to walnuts. Whenever he ate them his mouth got sore and irritated. After the NLP allergy relief process, Mark ate a walnut. No reaction. He ate an entire bag of walnuts with no discernible soreness in his mouth at all!

Since that training in April 2011, Will has eaten shrimp more than a dozen times with his wife all with none of the old allergy responses.  More importantly, will has worked with several dozen clients with allergies.  Most of them have been able to get symptomatic relief.  Many, like Will, got their lives back.

Recently, one client who worked with Will more than a year ago for a tree pollen and grass allergy that would, in his words, “Knock me out for almost two months,” followed up with Will to tell him that for the first time since he could remember, it was springtime and he felt great and he wasn’t spending all his time in the basement with a cold towel pressed over his eyes.”

What about you? Whether you suffer from allergies in Utah or anywhere else in the US or Canada, if you would like to explore the possibilities of allergy relief, give William Wood a call… He works out of Ogden, Utah, or nationwide by phone and skype.

William Wood knows first hand what it’s like to live with the constant threat of discomfort and even severe life threatening allergic reactions.*

After learning the NLP allergy relief methods, Wood returned home to Utah and immediately began working with hypnosis clients utilizing the methods. For more information on how you too can experience allergy relief,

or use the handy form below and Will will contact you…