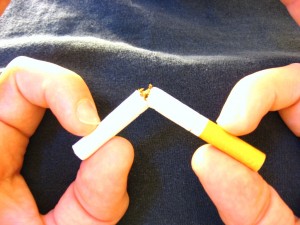 Part II: The Utah Guide On How To Guarantee You Don’t Quit Smoking

About two years ago, I got a phone call from a young man in his early thirties. He called up from somewhere near Salt Lake City and said that he needed to see me right away to stop smoking with hypnosis.

I offered him a short 15 minute “get-to-know-you” appointment, so that he could get his questions answered. He was a clean cut professional and came in to the session well dressed.

When he came in, he had the usual questions about how hypnosis would help him quit.

I said that I had met different kinds of smokers–that people smoked for different reasons and needed different levels of support during the quitting process.

He told me he had started smoking when he was 16 years old, going to high school in Ogden. His friends were smoking and he wanted to fit in. He had smoked about a pack a day since then.

I wanted to know about how much his body “needed” nicotine, so I explained, “Nicotine has a two hour half-life. That means that your body gets rid of half of the nicotine you smoke from a cigarette in two hours. Most pharmacists say that it takes about four half lives to eliminate a drug from your system.”

“What does that mean,” he said.

“That means that in a normal eight hours of sleep, the average smoker doesn’t have any more nicotine left in his body,” I said, “So often, but not always, smokers wake up with physical cravings. When you wake up in the morning, how long is it before you have your first cigarette, on average?”

“About 15 minutes. I usually get up, make a pot of coffee and then let the dog out into the back yard while I smoke,” He answered.

Because he craved cigarettes first thing in the morning and about every two hours during the day, his body was probably craving nicotine in the morning. So I wanted to know what happened to him when he had to go without.

So I asked, “So what happens if you can’t get your cigarette first thing in the morning? Let’s say you had to go two hours or more before you could smoke?”

“I would started to get irritated and I might get kinda angry,” He replied.

I asked him how he was planning to deal with the withdrawal symptoms when he stopped smoking.

He looked genuinely surprised, raised his eyebrows and asked, “What do you mean what am I going to do?”

He started to wave his fingers hypnotically and said, “I am not going to do anything. I want you to do your thing and make me forget that I ever smoked.”

When I explained that hypnosis generally reduced and did not eliminate craving symptoms, he looked a little mad.

“You mean I am going to have to work at this?” He asked.

“Well, I could try waving my fingers or giving you the ‘hypnotic stare,’ but it probably wouldn’t do that much to make you forget that you smoked. In fact, one of the most important things you can do to guarantee that hypnosis works is to make a rock solid commitment to quit.”

“I appreciate your honesty. What did you hope that hypnosis would do for you?” I asked.

“I guess I wanted you to do it for me,” he answered.

“That is a common myth,” I replied, “that the hypnotist will overpower you and make you a zombie. The truth is quite the opposite: hypnosis gives you more control over your own mind.”

I added, “Most people already know how to use the conscious mind and willpower, but they have no idea how to direct the rest of the mind, which some estimate to be as much as 88 percent of a person’s total mindpower.”

I continued, “I teach you to harness the power of your subconscious mind through the use of self hypnosis. ”

“Even if I could make you do something, I wouldn’t do it. My goal is to put you in control, to empower you to transform your life and help you reach your goals.”

“But another hypnotist told me that hypnosis would make me quit smoking and I would never crave a cigarette again,” he said.

I answered, “There are some hypnotists that will tell you whatever you want to hear to get you to buy their program. ”

“Some will tell you that you don’t have to work at all or that you will never experience a craving ever again. In my experience, while hypnosis helps people quit smoking, none of those things are true.” I said.

“So what DOES hypnosis do, then?” He asked.

“You consciously make a decision and then you teach your subconscious to support the decision–which keeps people from feeling like they are fighting their own mind when quitting.”

“Hypnosis helps you to be more comfortable while you quit smoking. ”

I continued, “Hypnosis often can decrease the intensity of the urges to smoke and I can teach you to use your mind to break old triggers and to find more healthy and fun ways to relieve stress.”

I added, “I teach you to run your brain in a way that makes it easier than you ever thought possible to quit, but if you are not ready to commit to quit and to apply the tools I teach you when you get stressed or have a craving, it is better to save your money until you can commit.”